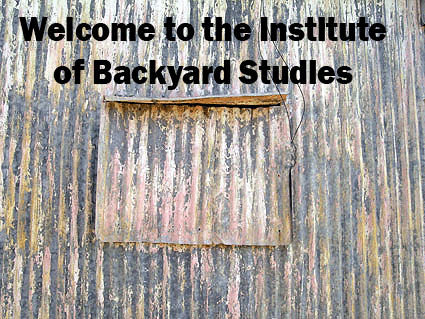 In building this blog/website, it’s been necessary a couple of times for me to point out that what we are trying to do is not just talk endlessly about sheds, humpies or backyard outbuildings for their own sake. There is a method, a big picture, behind it all. What I want to do is to encourage curiousity, creativity and resourcefulness and the place that it tends to happen most, in the way that I want to encourage, is in the shed.

The sort of shed culture that I am keen to propagate is about a sort of frugal thoughtfulness blended with the sort of creativity that has become unfashionable. Creativity is not an easy subject to raise in these circumstances because in many people’s minds it brings up images of.. well, wankers and artists who are obsessed with themselves. It’s a bloody tragedy that ‘creativity ‘ has now become a specialised activity and that people have bought the idea that there is a small specialised sector of zany, whacky creative types – usually weird, messy or otherwise being outsiders – and that there is everybody else, who are normal and not at all creative.

This proposition strikes me as crap. I meet large numbers of people who are undoubtedly stunningly creative and innovative in many ways. They might be builders or mechanics or any of hundreds of occupations but because they are outside of the conventional description of ‘creative’, or worse still, make things that are useful, their imaginative skills are not recognised. Officially creative is generally defined as things that have a big white space around them. That you know they are creative, such as in an art gallery or a framed picture that way you don’t confuse them with the merely useful.

Saying that most of the art world is basically up itself and a waste of time makes me, of course, an ungrateful barbarian to many of my former colleagues in the art world (yes, I once went to Art School).

And I would leave it at that but I feel that not harnessing or recognising the full creative talents of a culture could be a fatal flaw for any culture.

I’ve recently been reading “Collapse” by American biologist/geographer Jared Diamond in which he outlines numerous cultures and societies which have collapsed and vanished and why. The story of Easter Island is particularly disturbing. Jared Diamond points out; what could they have been thinking when they cut down the last tree, thus leaving them on a very isolated Pacific ocean with no way of making a boat to leave the place?

“Collapse” certainly makes convinces me that anyone who thinks that somehow the vast magnicient edifice of western civilisation couldnt fall over very easily is deluding themselves.

However, I’m starting to rant. I think I’d better go out to the shed and make something.

That’s why I want to encourage a sort of personal sense of responsibility for how the world works around each of us. In fact the backyard and its associated institutions – the shed and the barbecue to name a couple – can make a strong claim to being the very generators of our prosperity, our well-being and sanity.

The thoughtful application of the principles of mechanical advantage – the screw, the lever, the pulley, the wheel and axle and the inclined plane and wedge – meant that solving problems was a source of delight, satisfaction and even occasionally profit.

But with urban infill housing slowly taking over the backyards of our cities, this personal playground of creative minds is being obliterated.

We are becoming an indoor, inward looking nation, gazing out on patio courtyards paved from edge to edge and ordered to within an inch of their lives. The woodpile down the back or the pile of useful scrap has vanished. Rather than fix anything we ring up ‘the man’ (that mysterious individual from… where?) to come and install a new part or we buy a new plastic version made by slaves in some unseen part of the world.

Television, flapping away at computers and the minimising of all risk now dominates our lives. We are diminished as humans by technology almost as much as we benefit from it. We are literally losing touch with the world.

This website is for people who reckon that it’s no bad thing to get your hands dirty or those who don’t throw good stuff out at the drop of a hat. And if you’re one of those people, you’re very welcome to make a contribution.

The answer’s in our own backyard.