Ask many Australians about a question and he or she will often reply with a combination of yeahs and nahs that are a highly nuanced and conditional assessment of the situation.

This sort of thing irritates the hell out of some people – but in fact it may be that many Australians are sensing the longer term possibilities of directly communicating with the digital domain in its own binary language, substituting 1’s and 0’s with yeahs and nahs.

Eventually, we predict, Australians may lose the ability to speak in old fashioned ‘language’ and just use yeahs and nahs. This is what Australian Binary may ultimately sound like in some not so distant future:

There are already signs (below) that road traffic management, for instance, is shifting to the Australian Binary model.

As Advanced Research Director for the Institute of Backyard Studies, Mark Thomson travels extensively through the remote Australian bush. On his many expeditions, he would occasionally notice the odd road sign that did not seem quite right or seemed to hint at a higher purpose than mere directions.

Did these signs have a common origin?

After much research and with the support of colleagues from the Speculative Histories Laboratory, accumulated evidence revealed a curious narrative that is even stranger than fiction.

It is the account of Wayne Sartre, a lonely council grader driver, who came to know the powerful effects of isolation and of far too much deep thinking whilst driving a slow-moving vehicle.

Wayne Sartre, rural council council worker and philosopher, seems to have been the outcome of an error in travel bookings in the early 1960s.

According to Wayne’s own account, his father Jean Paul – a Frenchman of some notoriety – was mistakenly booked to fly to an academic conference in Austria.

When Monsieur Sartre landed in Darwin in 1962, he slowly realised he was not in Vienna but in a place called Australia. He soon booked a return flight to Paris – which  entailed a waiting period of several days.

In those few Darwin days, he met and had a brief passionate love affair with Doreen Wungadeer, a woman he described as “having great and strange powers”.

Wayne was apparently born of that liaison. The father kept a distant interest in his son, intermittently sending reading matter which the young Wayne, eager for the approval of his invisible father, would read and ponder upon greatly.

As a result of these meditations, Wayne would occasionally sneak into the council sign workshop at night and fabricate signs which he felt would be of genuine benefit to the thinking traveller. 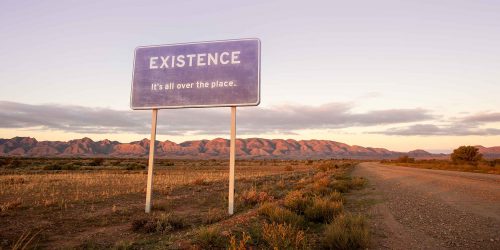 There are precious few of these signs left and they have been collected here for posterity. There are almost certainly more to be found out there somewhere. 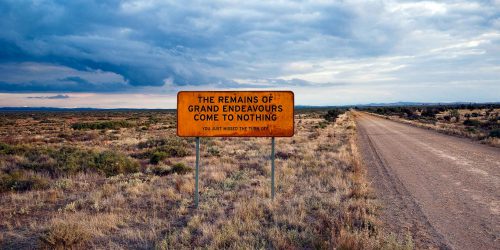 No-one knows for sure where Wayne is now. Some say he harvests sandalwood in Coolgardie, Western Australia. Others are certain he regularly drinks at the Cooktown pub in Far North Queensland.

Either way, if you meet him he’s definitely worth having a yarn with, especially about the uncertain consolations of philosophy.

The original full sized signs and the photos of them in situ are available for exhibition by enquiry to mark@ibys.org or by phoning 0419865821. Individual photographs are available for purchase through these contacts.

The large poster (30 x 120 cms) for the  Advice to Travellers exhibition in 2017 (below), which incorporates photos most of the current signs on it, is also available for a modest price through Ebay.

Mark Thomson wishes to acknowledge the generous support and assistance of the Speculative Histories Laboratory in this project.

$20 including postage and a dedication from the author is possible too!

After years of scrabbling around in the back blocks of Australia’s farm ‘resource collections’ (i.e. the back paddock dump) a second Toroidal Ring Vortex machine has been discovered and has being successfully restored.

Controversially, this is apparently a World War 11 German Wehrmacht machine known as a HF99. The HF apparently stands for Himmel Furz. Finding parts has been very tricky indeed especially something known as “die Klappe Foofer”. Any suggestions welcome.

If you do not know of the Toroidal Ring Vortex Machine, the video clip below shows one being operated by IBYS head chutney consultant Billie Justice Thomson.

Here is another recent demonstration of the HimmelFurz

The Toroidal Ring Vortex Generators are available for hire under certain conditions (email mark@ibys.org to start that conversation). They are an enduring source of wonder for all. The first Ring vortex Generator has now been hit/whacked/hammered an estimated 100,000 times plus. 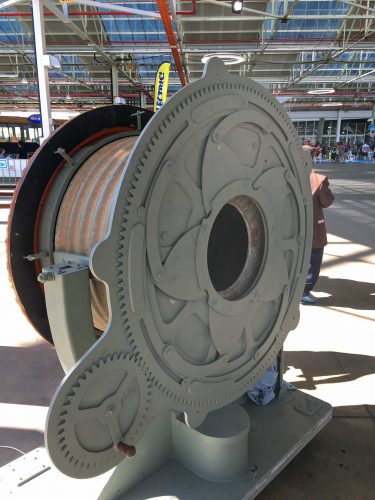 And in case you wondered whether they pull a crowd, check out the clip below from Science Alive 2017. Long queues!

Avian augury – the use of birds to foretell the future – has a fabulous history. Every morning I hear them telling me to get up and make the best of the day.
How to capture that indescribably beautiful sound of birds in the morning?

Short of superglueing some parrots to a fence, the avian research arm of IBYS has built a prototype that may be unveiled at the Science Week Fair in mid August…
Twittering machine trial 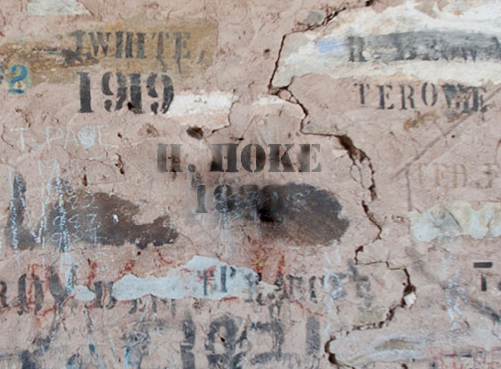 Recent research work by IBYS associates has thrown more light on Australian Inventor Henry Hoke’s “missing years” which currently seem to be fairly elastic – they could have taken up most of his life.  Photos taken in a remote shearing shed prove definitively that Henry really did work in the shearing industry- these stencilled letters which spell out his name on the shearing shed wall are part of a longstanding tradition when a shearing season comes to an end. The exact year of the stencilling is unclear.

Henry Hoke was thought to have invented the now-common shearer’s pizzle guard.

Any stories or anecdotes about Henry’s experiences as a shearer are always welcome. 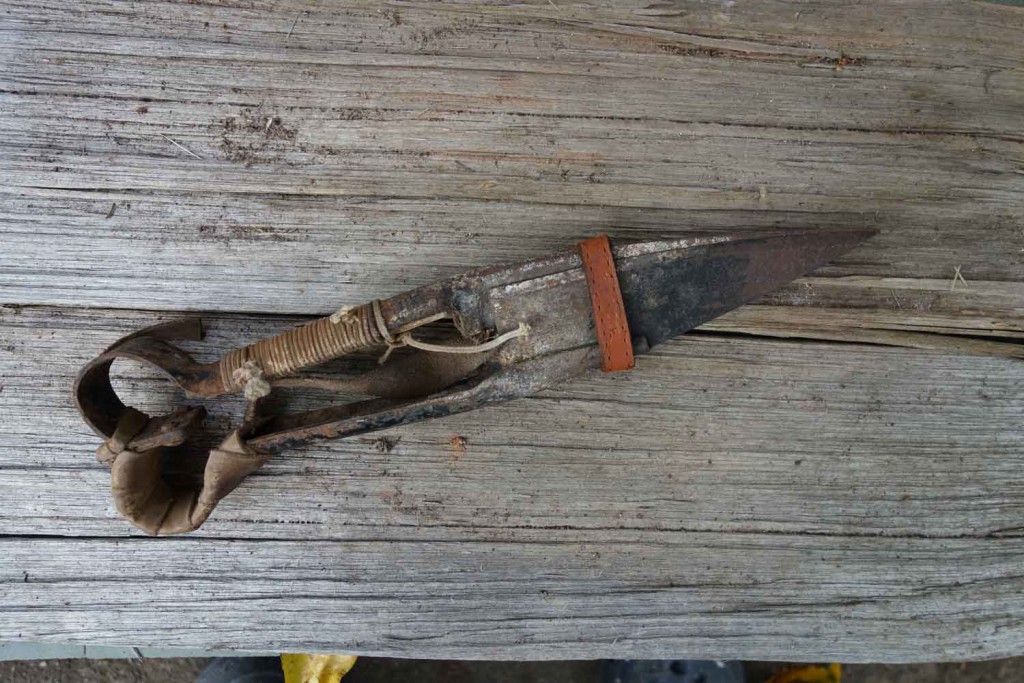 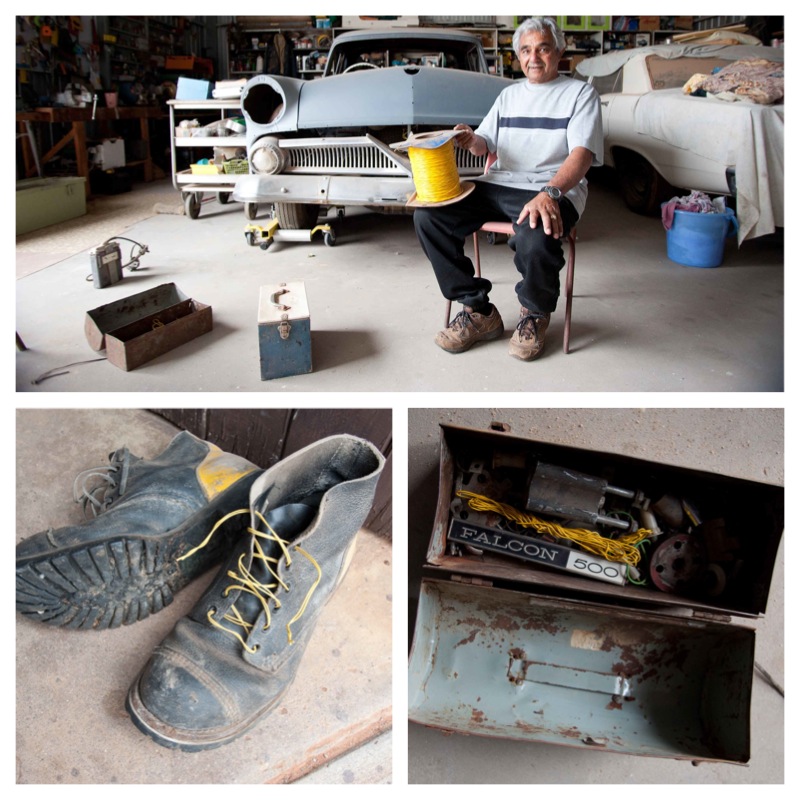 I’ve been up in Broken Hill and surrounding areas recently working on the wire project – which is about all the resourceful ways that people use wire to repair, adapt, create.

I’ve been on the track of “Broken Hill String”, which is the wire used in the local mines to set off explosives. Once used it is discarded and taken home by the miners who find literally hundreds of uses for it. It is a sort of predecessor to cable ties. There’s a great sense of pride in local resourcefulness here and a slight annoyance from the older miners I spoke to about the general wastefulness of modern life. More to come soon. I’ve also been out into a few local pastoral properties looking at the way people use wire (usually a lot heavier gauge wire) to repair and make things. Some of the building techniques are clever.

We think this event happened in 1981 and probably won’t be on this year. If you go, it’s your own fault. 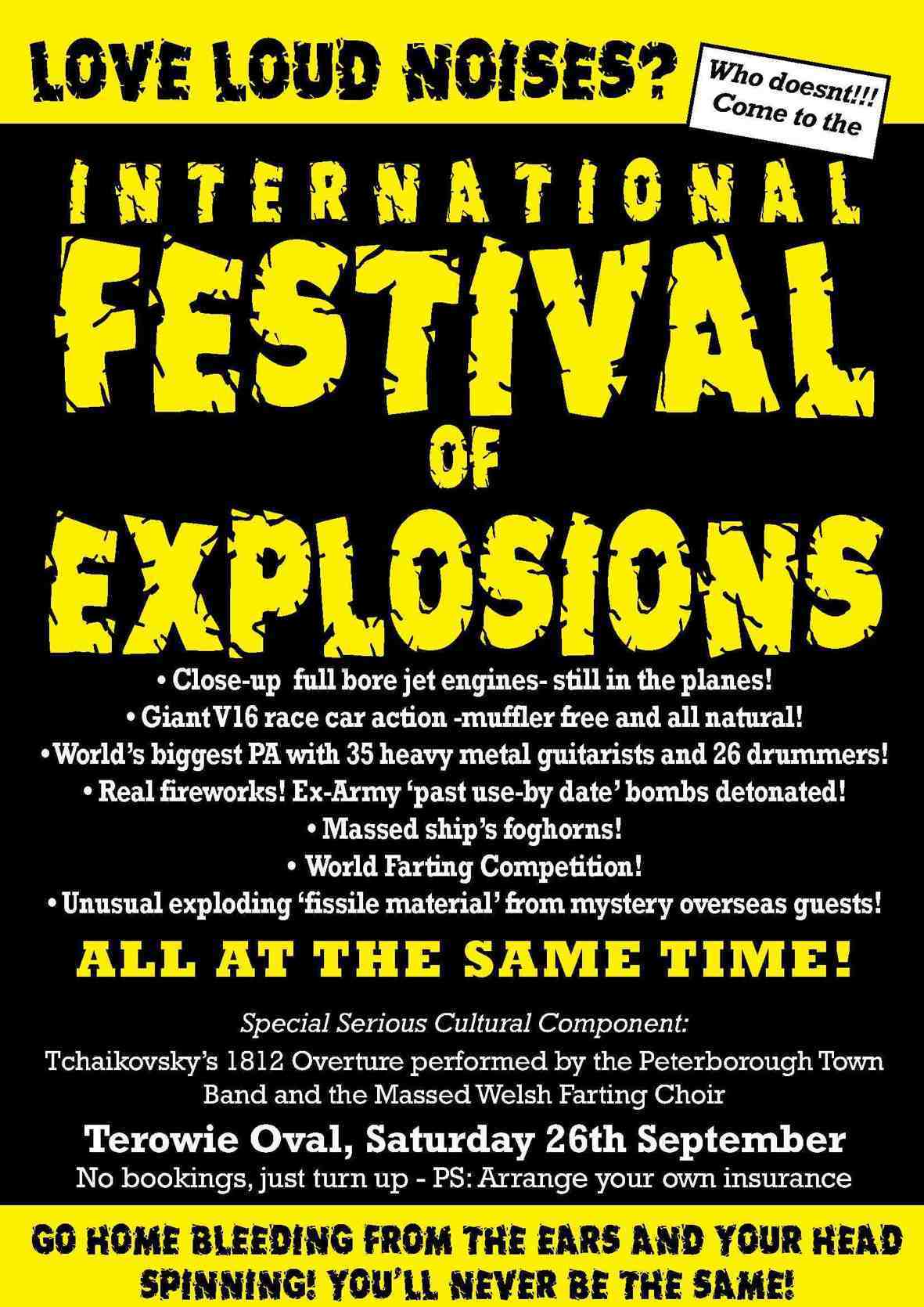 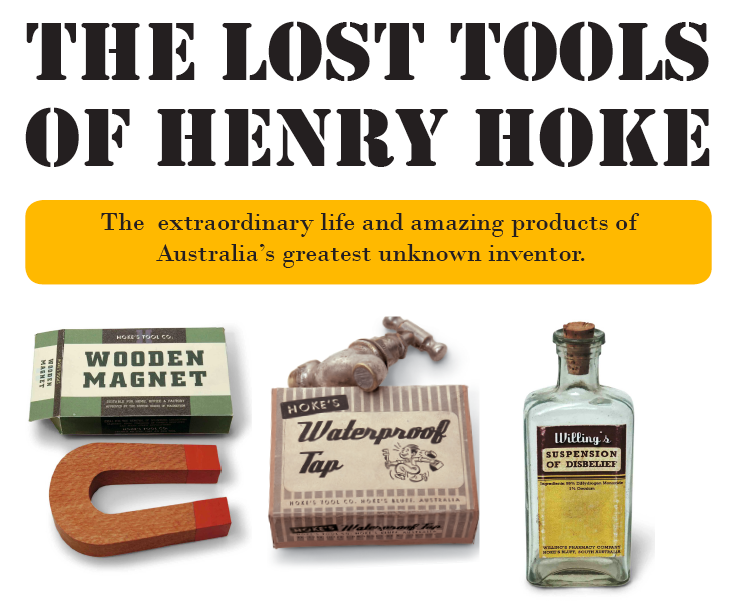 The immense Henry Hoke tool collection is currently located in Canberra where it resides in the care of the Questacon, the national science and technology centre. The researchers there are giving intense thought as to the potential uses of the collection, which does include a partly constructed Quack of Doom and the only genuine functioning analogue Random Excuse Generator (well, it works sometimes). 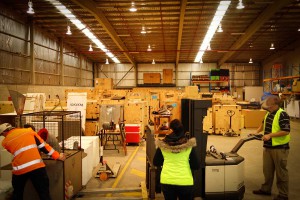 As a result of the Question arrangements, we hope to see a whole new generation of young thinkers, scientists  engineers and makers wrestle with the brilliant mind of the great Henry.

This film was made by cinematographer Kim Batterham, producer Graeme Isaac and director Mark Thomson, as part of the National Museum of Australia’s Rare Trades exhibition. We acknowledge the NMA’s assistance in bringing these clips to you.