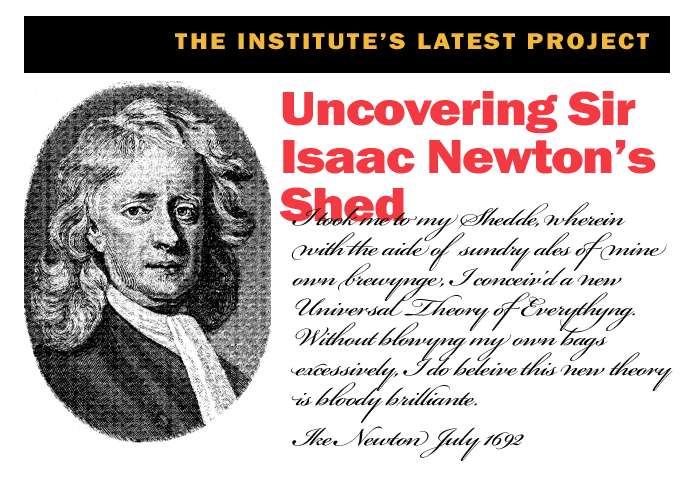 Recent investigations by Institute staff at an undisclosed location have discovered the original shed of all-round smartypants Sir Isaac Newton, best known for his 3 Laws of Motion (you know the sort of thing – “once moving at a steady speed in a straight line and so on and so on”)

In a shock revelation, documents recovered at the site reveal a hitherto unknown aspect of late 17th century shed culture: that Sir Ike was on the turps – in fact a sort of India Pale Ale – a good deal of his illustrious career. Detailed forensic analysis of some of The Newt’s (as in ‘Pissed As’) vomit-covered notebooks is currently being undertaken. IBYS Deep Shed Research Director Mark Thomson told an only slightly packed news conference that there is every possibility that there were in fact two more Laws of Motion but as the great man was too shickered on the day, he forgot to tell anybody.

Mr Thomson invites speculation and conjecture from the shed community – deeply experienced as it is in engineering, beer and sheds- on the subject of these two possible new laws – what were they measuring or defining?Your contribution on the comment link is welcome.