Every so often we receive stories and pictures from other sheddies, shed kings, or ‘shedonistas’ as UK associate Julian Lea Jones calls them.

Here’s a great example from Bobcat to get you thinking.

I am going on 62 years of age. From when I was 10 or 11 years old, I grew up in country NSW. My stepdad was a drover, an old bushie born up in Bowling Alley Point near Nundle in NSW. He was the smartest bloke I ever knew. It was marvellous what he could fix with a piece of No.8 wire and a pair of pliers. I often feel I was a bit of a dickhead for not taking in more of what he tried to teach me – he did most of his own repairs on his droving equipment and leather gear, did some blacksmithing, etc, etc. My brothers and I used to spend hours taking turns at winding the blower on his portable forge. He could fix most things that shit themselves. Boy, if only I had the nous then to take in more of his bushcraft.

I’ve missed out recording my days out droving, the endless nights as a kid listening to stories around the campfire – stories about a myriad of things to do with the good ole days and my own life from the 50’s onwards.

I still remember quite a lot but most is lost now. It’s a bloody shame. But back to the shed thingie.

As a kid I did all those things that young blokes do: pushbikes, billycarts, gadgets and inventions, things that make all the politically correct B#@holes of today freak out. I still remember my late brother making leaf springs out of Masonite strips nailed together then nailed to a billycart – and ya know, they bloody worked! He also fitted an old Victa lawnmower engine to his fixed wheel bike. I spent hours towing him up and down the street on my bike trying to get it to start. Lucky it didn’t start. Some knowledge of gearing probably would have been helpful. Lots of laughs.

I have owned a few modified cars: FJ/FC/FB and EH Holdens, utes, vans and sedans. Nothing too flash. I once owned a real cool 1961 Studebaker Lark, and some motor bikes and much more. Sorry, I’m rambling again. My first sort of a shed was an addition to a large carport on our first house at Modbury Heights in Adelaide. The carport was 9 metres by 7 metres and I closed in the western side for a workshop that I built myself, complete with a lockable storage room for my tools.

That was in 1977/78, about the time they banned advertising for smokes on TV. I was Somehow I stopped smoking. I had been smoking 25 to 30 a day at home and sometimes more than 60 a day when I was working ( I was driving interstate trucks at the time) for 10 or 12 years. So when I gave up, I spent the money I was spending on smokes on tools instead. My missus was quite happy with that and I’ve never got into trouble spending money on tools.

I first bought myself a Transarc Easywelder, a 5 inch Makita angle grinder, a Bosch 3/8 drill, a Taiwanese drill press and a bench vice. I slowly but surely built my tool kit and workshop up from there.

I built two steel workbenches in 1978/79 and I still use them today.

I moved all this gear from Adelaide to Leigh Creek (1981) then to ‘Kikatinalong’ at Port Pirie in 1991 and finally to Caboolture in Queensland (2000). The welder is still working but the angle grinder died last December, after all that time. I did replace the armature once after I cut the floor out of a VW bush buggy and did a lot of other work it wasn’t designed for. The old Bosch drill shit itself a few years ago but the rest are still going strong.

Using this gear over the years I have built heaps of bullbars and stuff for 4×4’s, loading racks, tandem and box trailers with gates or loading ramps, implements for Fergie tractors and lots of other items too numerous to mention.

In 1981 we sold our house in Adelaide and moved to Leigh Creek up in the Northern Flinders ranges for 10 years. Leigh Creek houses had sheds about 4.8 metres by 7 metres and being on shift work, the amount of time spent in the shed was unreal. What I’m trying to say is that the shed was well worn by the time we moved out in1991. At this time we acquired 2 trikes, a Honda 70cc for the kids and a Suzuki 125cc for myself. I also bought a wrecked 125 and used the rear axle and other bits to build a trailer for my trike, which our old blue heeler Ugly loved.

Our stay in “The Creek” was great. We went all over the Flinders Ranges and up the Birdsville and Strezlecki Tracks. We used to camp at Muloorina Station at Lake Eyre (it was about an hour and a half drive from the Creek) about 4 times a year and saw water in the lake 3 or 4 times in our 10 years. (I still have a litre coke bottle of water collected from the lake in July 1983). We also travelled to Lake Torrens, to some great sand dunes at Ediacra (west of Beltana) and also to Coober Pedy, Woomera and Roxby Downs. In 1988 we had purchased “Kikatinalong”, a five acre block at Port Pirie, South Australia. It came with a house and three sheds, all only a few years old. We used the 7m x 6m shed on the back fence for storage and I pulled down a 4.8m x 3.6m shed and built a BBQ area and an elevated cubby house for the kids on the site.

The other shed, which was 12m x 6m had a pit and 3m x 6m office. I used bits from the shed I had pulled down to extend the big shed (that’s another story) but over the years we were there I installed a tiled shower, kitchenette, a storage loft, shelving and extra storage and more workshop areas. The move to Kikatinalong was supposed to be our last move.

In 2000 we decided to move to Queensland to be nearer some of our kids. We were too far away if there was a problem family wise – a 20 odd hour non-stop car trip was required.

The exercise moving up here was a huge saga and a story on its own.
Once here we inherited a 6m x 6m shed (now 9m x 6m. The bloke that owned this place before us must have been a bit of a galah as he built the shed at far end of the yard and the other side of the house – so you have to back the car and trailer across the back lawn to get to the shed. 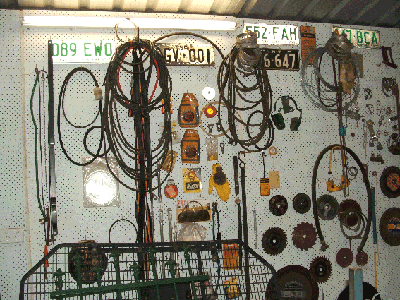 We bought with us some of the storage shelving and three work benches, steel odds and ends, boxes of bolts and screws, fittings, all kinds of stuff new and used, two diamond drill bits, a steel tyre off a wagon wheel, a bullock yoke and some harness, a dingo trap and other stuff too numerous to mention. I find it hard to believe I really did bring some of the stuff all the way up here. It’s a bloody joke.

How does one fit a 12m x 12m shed into 6m square shed? I’ve tried to set it up as good as I can – power points everywhere, plenty of lighting. pegboards on most walls. For what it is, it’s OK.

Then, two years ago I was diagnosed as having Chronic Myeloid Leukemia (CML). I kept on working until 4th December last year when I was squeezed out – good ole honest John’s IR laws strike again.

I now have plenty of time for the shed. On retirement I bought myself a new MIG welder, $2,000 worth of Metalcraft gear,, a new Makita 5 inch angle grinder, a belt/disc sander, a guillotine for cutting steel bar etc, a large workshop fan, 14 volt drill to replace the ole 9 volt Makita and built a new mobile 2.4m x 1.2m work bench.

I did the extension of the shed with a little help from my wife and one of my daughters. It took me a few weeks due to my illness. I had a concreter do the slab and we did the rest, also installing a 3,000 litre water tank with pump etc. I also built a steel storage rack outside the shed and fitted it with plastic sewer pipes with capped ends to try to keep my steel bar dry and free of rust… hopefully.

I’ve found that my shed keeps my mind off my illness and I don’t dwell on things as much. I don’t spend all my time in it as the drugs I’m on have a “chronic fatigue” type of effect and some days I only make the lounge. I do try to keep busy most of the time in the shed or in the yard. My early retirement upset our plans – we were going to do the old grey nomad thing but had to use most of our super to pay off the house. We will prevail though, no worries.

I have considered the shed club thingie in your last book. My only problem is that a lot of people who go in for that sort of thing have never owned a shed or tools in their whole life. I’ll speak form some of my own experiences: some fellas over the years have tried to borrow my gear – some blokes in Leigh Creek once tried to borrow my cement mixer. “I’m sorry I don’t lend things” I said “Ah shit, we’ll have to hire it then… how many bloody slabs will it cost?” “Sorry, I don’t hire my stuff either.” “ Well you can go & F#@*! ya self” End of story.

I have found that a lot of blokes who drink , smoke and gamble etc spend all their $’s on the same ( and that’s up to them – no worries) but they are always the ones on the bludge.

The thing is that I went without heaps of other things to do my thing, which is building up a really cool shed/workshop. I have been caught a few times but not too many. It’s easier to say no in the first place.

On my present 4.2m x 2.4m tandem trailer I have put some stickers on the rear mudguards that SORRY TRAILER NOT FOR LOAN OR HIRE and some people still try it on. No-one looks after your gear the way you do yourself although. Over the years I have helped out countless friends and people in strife I have always used my on gear. But I’m straying off the track again, eh.

In closing I have enjoyed many a visit to other’s sheds. Or places like the dump at Muloorina station, which in 1991 was a museum of old gear from 1909 to the present. There was even a old 6×6 Army Duck and a gyrocopter. I was amazed by the old Blacksmith’s shop at Copley near Leigh Creek. It was just as it was when the smithy shut doors in the 40s or 50s.

I have adopted many a good idea form other blokes and their sheds and hope to see a lot more before I check out and close up my shed for the last time. My grandsons will hopefully inherit some really good tools… I do spend time in the shed with one of them but it’s never enough though. I think a few of them will be sheddies later on. I sincerely hope so. 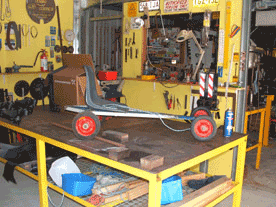