There was rain forecast on the television last night. Oh that’s good, everyone says, but there’s an edge of doubt in how they say it.

Three days a week I work in Renmark in South Australia’s Riverland region, where I am helping some friends compile a book on propagating citrus. There’s an irony to this task as the country has been hit by severe drought and the once mighty flow of the Murray River’s irrigation waters – that gave the citrus industry an essential ingredient in what would otherwise be desert – have lessened to an increasingly sluggish and salty trickle.

Despite this change, there is a great beauty about the place in the time before dawn, when I go for my daily walk.

I walk through arrow-straight rows of oranges and vines, laid out in flat precise grids and dotted with modest houses. Each house, apart from its 10 or 20 acres of fruit trees, is surrounded by its own protective clump of palms, gums and ornamentals to stave of the heat of a baking summer. These homes were established in the twenties and thirties, the products of unbounded optimism and of ‘the blockies’ – fruit block owners who got up at 4am and worked very hard all day.

In the still air of the deep violet dawn in the east, there’s a sense of momentous occasion to the place; it’s as though it’s all a film set and an orchestra is playing some inspiring overture. The rich red sand and dark green trees are slowly and softly set aglow by horizontal golden light in the rising dawn. You can almost hear the violins sawing away.

In this pleasant setting every morning I try to take a different route through the grid of roads spreading out from the town. This morning, the air is chilly but not unpleasant: the rain has, once more, failed to materialise.

There is no-one else around.

As I approach one house, close to the road, I see a man is sitting on an armchair on his verandah.

He would not expect anyone walking along the road at this time of morning and has not seen me. He is in his fifties, scrawny, very suntanned and wearing a bleached Drizabone raincoat over his shorts. His posture on the armchair is not comfortable: he is sitting on the edge of chair, looking down at the ground, with his hands clasped together between his open legs.

He is completely lost in his thoughts and I stare at him, feeling a sort of embarrassment for intruding. Perhaps he really had expected it to rain when he got up and put on his raincoat as some gesture of optimism.

Then my clumsy steps passing him by alert him to my presence and he glances up.

He has the look of a haunted and troubled man and for a moment I feel I am witness to some grievous personal tragedy. Maybe it involves the family or the banks or the bills piling up or the fact that the fruit block his father carved out of the scrub may soon return to that state and after a lifetime of hard work he, the son, will have failed. I don’t know.

He gives a brief nod of acknowledgment and I do the same. The blockie gets up and goes inside, slamming the screen door behind him.

Walking back to my comfortable desk work on the computer for that day, I suddenly realise perhaps I disturbed him praying.

Praying that his hopes won’t curdle, that the farm won’t go for a pathetic song at auction.

For just a bit of rain that won’t make him feel like a fool for putting on his raincoat.

he experience has stayed with me because it was the briefest glimpse into some unknown region. Perhaps it was what climate change might mean at the personal level. Or the fate of farmers and people on the land throughout history. Or of just someone else’s life.

Henry Hoke’s Guide to the Misguided is the story of an unsung inventive genius whose work could have revolutionised the modern world. From an isolated workshop in a distant windswept town came a constant stream of dazzling leaps of mechanical imagination, culminating in the extraordinary Random Excuse Generator. The long weight, the wooden magnet, the glass hammer, dehydrated water pills – the man’s mind was truly a fountain of innovation. Unaccountably, all these brilliant tools have now all but disappeared. In this groundbreaking new book, deep shed researcher Mark Thomson uncovers the true story behind our greatest inventor – or why, as Henry Hoke himself was known to say: ‘There’s no tool like an old tool.’

Shed culture is about resourcefulness – or for our purposes, not throwing things out and finding a use for them.

It all comes down to the properties of things. How often have you looked at a machine part or a piece of discarded material and thought: that looks as though it could you can see it would be useful in some context. You know enough about how things are made to see that there has been a lot of energy and resources invested into the thing you’re looking at. Furthermore, you can see it has properties that make it useful: it might have bearings in it or a perfectly useful motor or transformer. Or it might just be very strong or flexible.

Take those plastic tongues you use to join chipboard flooring together. They’re often discarded around building sites and you often see builders pick them up and take them home. The stuff is just so strong and flexible – it’s damn near indestructible. But what can you do with them?

This section of the IBYS website is dedicated to your suggestions about smart reuse of such things. We want you to share your ideas and contributions.

I’m not talking about making things into decorative objects ie turning discarded typewriter keys into hair decorations or Coke cans cut up into mobiles but make use of the physical properties of otherwise to-be-discarded goods into useful things that have an extended and very functional life.

Third world countries do this already of course(see photo) 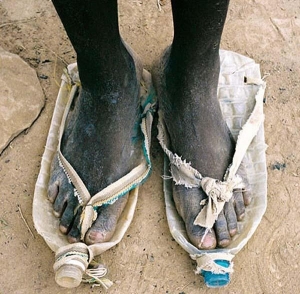 It’s just us slack-jawed wasteful westerners who have got into some very wasteful habits.

The Russians have a big tradition of this too and you might want to check out Mr Vladimir Arkhipov’s rather unusual website http://www.folkforms.ru to see some of his unusual collection.

In the meantime here’s a few more ideas;

What can you do with old bicycles? I’ve seen bikes made into water pumps, knife sharpeners, even drinks blenders. (Any photos appreciated) or old clothes hoists it all sorts of lifts and other devices.

Windscreen wiper motors are put to a thousand uses too.

Show and Tell Sheds: the place to post your own shed stories and photos

Any Questions? Got a shed problem? Need some help? Ask your question here and see if anybody has the answer

Shed Buy, Sell and Swap: a good place to look for things you need, or offer things you don’t need any more

Everything else: general chatter

Forum Housekeeping: the rules of engagement, dedicated to keeping the Forum friendly

Start by entering a username and password, and then you’ll be registered as a member of the Forum. You’ll need to use the same login every time you go to the Forum. We look forward to sharing some lively discussions, debates, creative ideas and inventions, as well as seeing your own shed stories and photos. So don’t hold back, start writing. (At the moment we are getting a lot of spam – we’re trying to eliminate it. However we can spot the difference between your genuine contribution and ads for bloody I-phones)